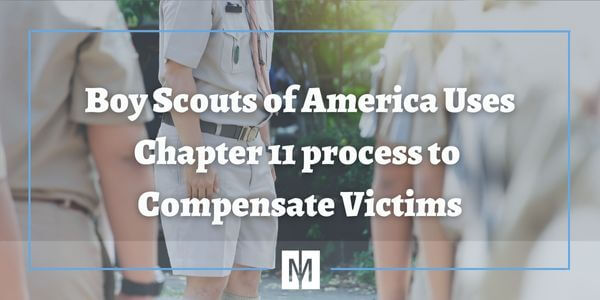 Presently, the Boys Scouts of American has over 2 million members and nearly 900,000 adult volunteers. The BSA has been sued numerous times in recent years. The allegations, including those in the pending class action, are frighteningly similar. In 2010, in one of the first cases against the Boy Scouts, a jury awarded the victimized Scout $18.5 million for abuse that occurred in the 1980’s. Many changes have been made for the screening and supervision of leaders, but not before decades of abuse went unreported.

Now, however, The Boy Scouts have filed for bankruptcy, and concern is widespread that the opportunities to identify both perpetrators and victims will be chilled.

Countless boys and girls have been victimized by sexual predators associated with the Boy Scouts of America. Many such cases are now being pursued as part of a national class action. If you or your child have been victimized, you may be entitled to compensation through either the class action or in an independent case. To pursue a claim through the class action, it must be submitted no later than November 16, 2020. The Boy Scouts has long been a respected molder of young men and women in a host of practical and moral skills. Unscrupulous leaders, nonetheless, have preyed on many children. Boy Scout leaders are trusted authorities. Trusted adults can frequently be perpetrators. Children are taught to respect their elders, and a trusting relationship is the core of the Scout/Scout Leader framework.

Perpetrators are often in a Position of Authority and Trust

Many instances of sexual abuse are perpetrated by trusted members of the community. Parents do not knowingly subject their children to close relationships with sexual predators. Frequently, when a child first reveals facts amounting to abuse, parents and other trusted adults are incredulous. “Surely, the child misunderstood the situation, or worse yet, is lying.” All reports of suspect conduct should be taken seriously. A child who has a history of enjoying youth events and organizations who suddenly expresses reluctance in continued participation, may be revealing his discomfort with an abusive situation.

Scouts, both male and female, are frequently in close, private settings with leaders. Camp outs, hikes, and other outings with no adult supervision other than Scout leaders, unfortunately present ample opportunities for the unscrupulous leader to pursue victims. Certainly, few Boy Scout leaders are sexual predators. The vast majority devote their time and energy to Scouting pursuant to the utmost principles. Still, the Boy Scouts have been besieged by enough complaints that, as an institution, they fall into a class of suspect organizations for failing to screen leaders, identify perpetrators and disclose the instances that would have warranted action by parents and victims to end the violence and to obtain proper care and counseling.

If you or your child is a victim, act now. Time may be running out. Not only did many acts happen in the distant pass, raising questions about time limits or statutes of limitation, pending class and bankruptcy cases may impose separate deadlines for claims.