What Does it Mean to “Assume the Risk”? 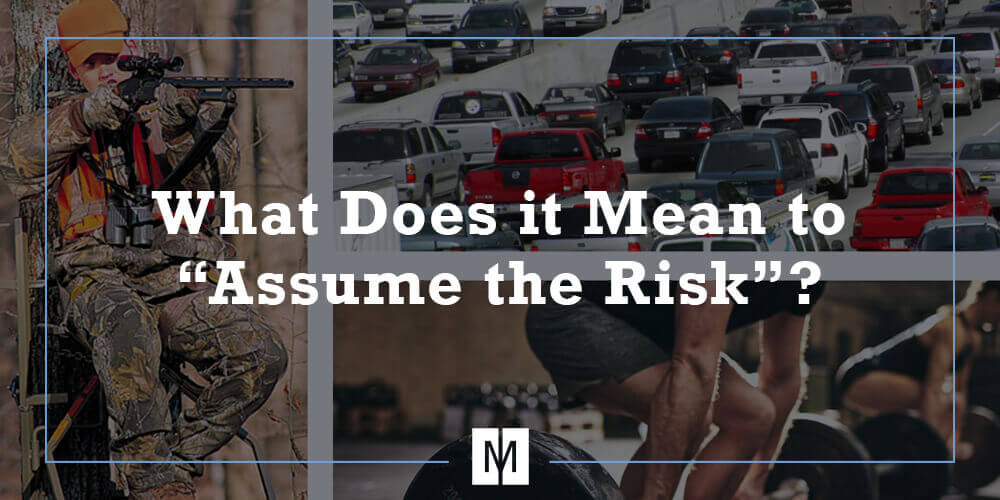 Assumption of Risk in Daily Activities

Do you know what it means to “assume the risk” of an activity? Many activities involve an element of risk. Some are inherent to the activity undertaken such as shooting off fireworks. However, people undertake tasks every day that are less threatening than shooting off fireworks. These tasks also require assumption of some inherent risk, despite all exercised due care. Few activities we undertake involve greater risk than simply driving an automobile. We risk mechanical failure, road defects, the negligence of other drivers and our own inattention. However, we do not truly assume the risk that Bob will drive 80 m.p.h. in a 40 m.p.h. zone under the influence of alcohol. When we got into our vehicle that evening, while there was a vague and general risk of a collision, we did not assume the specific risk of Bob’s reckless driving.

Assumption of the risk involves a conscious or knowing acceptance of risks that are inherent to the activity. Or, of which the participant has been thoroughly and completely informed. For example, have you ever attended a baseball game, particularly a Major League game? If so, chances are the reverse side of your ticket for admission addresses your assumption of the known risks of attending such an event. Primarily, fans assume the risk of a baseball or bat leaving the playing field, striking them and inflicting serious injury.

Recently, some Major League teams, including the Kansas City Royals, have extended the netting behind home plate. This is a valuable improvement for fan safety. However, what happens now when a batted ball strikes a fan just beyond the end of the netting? Once major league teams assume a greater duty to protect, what happens if they do it inadequately? These are issues yet to be resolved. However, many courts have upheld the protection enjoyed by sports teams for injuries to fans.

Other than shooting off fireworks, another common example of an activity with an inherent risk, is hunting. Firearms, tree stands, defects in real property all present risks to a hunter. However, one cannot assume all the risks. The handling and use of a firearm may involve known risks, including the threat of being shot. A hidden defect, such as a firearm firing without pulling the trigger, is a risk that one cannot know or willingly accept. A hunter may understand the risk of falling from a tree stand, but not when the fall is a direct result of a defective product.

We have all signed “waivers” or “liability releases” when engaging in an activity that involves a known and generally accepted risk. Many individuals believe that by signing a “release” they are prevented from suing for any injuries they may suffer. In most instances, the signing of a release has no direct impact on the ability to sue. Known risks that are inherent to the activity may still constitute assumed risks. However, to assume a risk, the injured party must truly and consciously undertake the task with thorough understanding of those risks.

Such releases usually list some of the ordinary risks for which someone is “waiving” liability. But generally, a participant is not waiving his/her rights to sue for injuries resulting from the negligence of the party demanding the waiver. For instance, let’s assume someone wants to go to a fitness center. Before he can use the facilities, the owner of the center demands that the user sign a waiver.

The waiver claims the signer is releasing “any and all liability” associated with the use of the facility. This includes injuries that are the result of improper use of the weights and machines, exertion or other strain-like injuries, heart-attacks, dropped weights, falling weights, etc. etc. etc. However, the waiver says nothing about releasing the owner of the premises from his/her own acts of negligence. One of the machines tips over and severely injures a bystander using the gym. The machine tipped over because it was improperly installed. The owner left the anchor bolts unsecured. Here, the injured gym user could sue the gym for the owner’s negligence in failing to properly install and secure the machine.

Increasingly, premises owners and organizers of activities are including language in their respective waivers that participants are waiving even injuries that are the result of the operator’s negligence and not just the inherent risks of the activity. Courts highly disfavor these provisions. Any such language must be clearly, conspicuously and unambiguously displayed. Often, the circumstances for execution of such waivers are a further defense to any enforcement of the waiver and the imposition of an assumption of the risk defense. They herd new participants like cattle into an activity as a person at the front desk nonchalantly waives a release in front of their noses, politely demanding, “Sign this.”

Rarely, do they explain to participants what they are signing, or what the full implications are. Such waivers are “contracts of adhesion.” The operator of the activity or premises has all the leverage. The unsuspecting participant, who may have little or no experience to truly judge the risks of a new activity, has no choice but to succumb to the control of the owner/operator.

Defendants will uniformly claim the participant assumed the risk. However, many arguments can be made to avoid the preclusive effect of such a waiver. Only an experienced attorney can navigate around such releases. They can distinguish between assumption of risks well-known to the injured party that are inherent to the activity. Versus risks imposed on the injured party by calloused and sneaky operators and owners.

Questions About Your Injury?

Assumption of risk is all about knowing the risk of an activity and willingly participating anyway. If you or a loved one have been injured and have a question about who is responsible, contact our experienced injury attorneys. We have over 30 years of experience helping injured victims.