What’s The Difference Between a Civil and a Criminal Case? 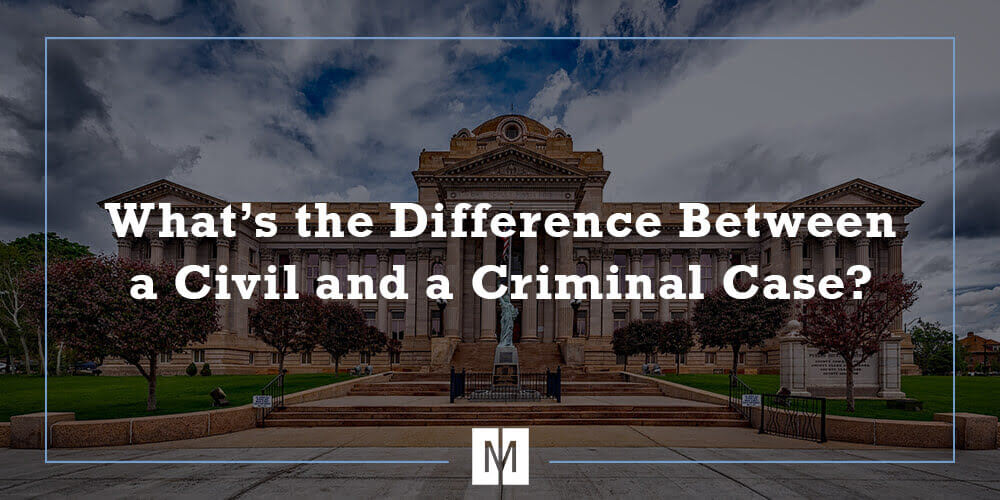 There are two different bodies of law that create our justice system: civil cases and criminal cases. Criminal cases happen when someone breaks a law, or commits a criminal offense, which typically results in jail time. Civil cases handle almost all other disputes, and typically aim for some sort of recovery.

Both involve trial work. Both involve arguing cases in front of juries presided over by a judge. The judge makes rulings on certain pre-trial matters and evidentiary disputes. In some states, there are distinctly civil litigation judges and criminal litigation judges, but in many other states (e.g. Missouri and Kansas), a single judge handles both criminal and civil cases.

Can there be a Civil Case along with a Criminal Case?

At times, a criminal case and a civil case can arise from the same situation. If a drunk driver crosses the median and kills another driver, they can charge the driver with a DUI and manslaughter. The criminal case would most likely result in jail time.

In addition, the decedent’s family can file a civil suit against the driver for wrongful death. The civil suit would aim to recover a monetary settlement for medical treatment, funeral expenses, lost wages, and other damages resulting from the incident.

To learn about the differences between the civil and criminal courts for sexual abuse cases, click here.

While there are different procedures that apply to one versus the other, the greatest distinction is in the “standard of proof” necessary to win your case. Criminal cases require the prosecution to convince the jury that the defendant is guilty “beyond a reasonable doubt.” Even the very slightest doubt regarding guilt should result in a finding of “not guilty.”

By contrast, civil cases require a reduced standard of proof. This standard is generally referred to as a “preponderance of the evidence.” If you consider a balance scale, conceptually, the plaintiff must only barely tip the scale in his favor to earn a verdict. In other words, the person prosecuting a civil case must only convince the jury to believe his case is more likely true than not. If there is a corresponding criminal case, it probably speaks well for proving liability in the civil case.

The criminal case has no direct impact on the outcome of the civil case. Even if they find the defendant not guilty, it is possible to have a successful civil case. Since the criminal case required a higher standard of proof, the defendant could still be pursued civilly. Most will recall that O.J. Simpson was acquitted in his criminal trial for the murder of his ex-wife Nicole Simpson and her friend, Ron Goldman. However, Nicole’s family pursued a civil wrongful death case against O.J. and won. How? Because the civil case only required proof by a preponderance of the evidence, as discussed herein above.

While the criminal side can help prove liability on the civil side, it is often difficult to obtain the cooperation of law enforcement to facilitate the civil case. Criminal cases can be a source of information in instances when there is an understanding and cooperative police department and prosecutor, but many law enforcement personnel and prosecutors are territorial about a criminal prosecution.

Many states, including Missouri, mandate release of criminal investigation records. However, it does not require parties to release such records during an active investigation. While the statute seemingly permits disclosure to victims of criminal wrongdoing, many prosecutors loathe disclosing records even to assist victims of the crime.

Moreover, when a civil defendant is also subject to criminal prosecution, the defendant will frequently “take the 5th”. In a criminal case, the prosecution is precluded from making any comment that invoking the 5th amendment should be construed as suggestive of guilt. Not so in a civil case, when a plaintiff’s attorney is free to argue that “taking the 5th” can be construed as indicating guilt.

While this can assist in the pursuit of a civil judgment for damages, in such instances where information from the defendant is necessary to effectively prove the case, invocation of the 5th Amendment privilege can be a barrier to proving a civil lawsuit.

Finally, the more heinous the conduct, the less likely there is insurance coverage for the incident. Most liability insurance policies exclude coverage for acts that are intentionally causing injury or damages. Even if they find the perpetrator guilty in the criminal case, insurance companies may claim there is no coverage.

There are many layers to every civil case. Can one prove wrongdoing? Can the injured party prove that damages directly resulted from the wrongdoing? Even if they can, is there the ability to collect recovery for the damages? When there is criminal prosecution that coincides with the civil wrongs, an attorney with experience navigating through the criminal prosecution and with knowledge of insurance policies, is a must.